In mid September of 2020, several of my riding partners met at McDonalds for breakfast on a Saturday morning and then headed out for a ride towards Hope.  We stopped in Hope for fuel and I noticed that I was getting very near to 200,000 kms on my odometer.  I mentioned this to the guys and we decided to ride until my bike hit that milestone!  Off we went over the Hope-Princeton…. 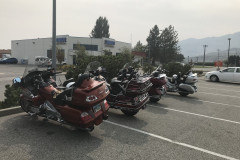 We stopped for fuel in Keremeos and noticed the skies were getting smoky.  This was because of a large forest fire burning south of the border in Washington.  We decided to keep riding east to see if we could get out of it….. 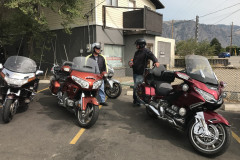 Instead of clearing up, the smoke got thicker the further east we rode – Osoyoos and then Grand Forks where we could barely see two city blocks!  After going over the summit of Paulson Pass, we headed north from Castlegar to see if it was any better.  We headed into the Slocan Valley towards New Denver where the air finally cleared up and we could see the mountains around us. 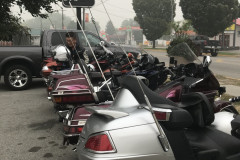 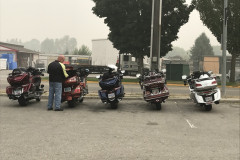 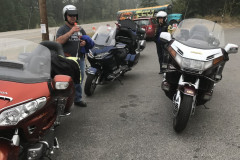 By now, it was getting dark but we had a mission – hit the 200,000 mark on my odometer!  It was getting close so we started heading west again over to Nakusp and down to the Needles Ferry.  We managed to catch the last ferry of the day and proceeded up Monashee Pass in the dark. All our bikes are equipped with very bright LED headlights and driving lights.  It was an awesome ride up the twisty road in the dark.  Here is a video of that ride….

We stopped for fuel in Vernon and had a bite to eat before heading down into Kelowna and over to Merritt.  Another break in Merritt and I figured we might hit the milestone somewhere on the Coquihalla.  At exactly 1:41 in the morning at the summit of the Coquihalla, it happened!  We stopped to photograph the evidence and headed on our way home.  I think I got home just after 3:00AM!  We did over 1400km on that ride, wayyy too long of a ride for some, but just another day for some of us in GWRRA Chapter BC-A, home of the Vancouver Geese! 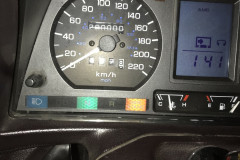 Here is the Relive video of the whole trip….