The Tail of the Dragon is located southeast of Nashville near the entrance to the Great Smokey Mountain National Park.  It is a section of Tennessee State Highway 129 and consists of 11 miles of the twistiest, turniest highway ever – 318 curves in all!

I was able to rent a Harley for the weekend and put a ton of miles on it over the next couple of days.  Smokey Mountain Harley Davidson has a great selection of new model Harleys for rent at fairly decent prices.  Check them out if you are in the area.

The day started out in Nashville, with a two and a half hour drive to Maryville where the Harley dealer was.  My reservation was booked for noon on Saturday.  We arrived shortly before and they had the bike fuelled and ready for us.  After filling out the paperwork, selecting helmets and loading our luggage onto the bike, we were on our way.  The dealer has a very large parking lot, with no problem leaving a car there for several days.

We rode the Foothills Parkway south from Maryville for 17 miles to where it entered into the Dragon.  It basically starts with a road sign warning of curvy roads for the next 11 miles and warnings to large trucks that there is a turnaround just ahead because many of them would not be able to negotiate the many switchbacks.

The speed limit dropped to 30 MPH.  A good indicator that things were going to get exciting!  We travelled along the side of a beautiful reservoir for a stretch before the curves started to pile up in front of us.  Traffic was moderate – mostly bikes!  When a speed sign warned you to slow to 15, they meant it!  We twisted and turned our way along for just under an hour before coming into Deals Gap and the North Carolina border.  There were many photographers along the entire route snapping thousands of photos as every vehicle that came into view passed by.  We learned later how to download and purchase pics that were taken of us while on the road.  Views were spectacular, but we were too busy hanging on and negotiating the corners to really look up for an extended view!

At the end of the Dragon is a motorcycle resort called Deals Gap.  There is a pub, gift shop, and probably a thousand bikers on a sunny day like the day we were there.  We stopped to buy the obligatory souvenir T-shirts and continued on our way towards our final destination – Bryson City.  It was only 2 in the afternoon, sunny and warm, so we decided that maybe one more road needed to be discovered – the Cherohala Skyway.  What the heck – it was only 60 miles! 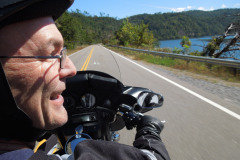 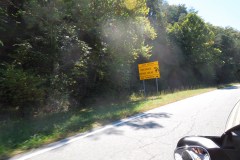 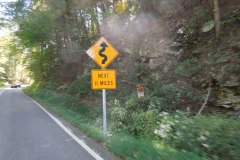