Day five of our journey started out like day 3 and 4 – raining and cold.  We packed up and had a breakfast made from food and snacks we purchased the day before at the local grocery store.  We then fueled up and headed on our way. 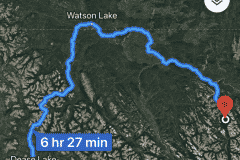 It stopped raining shortly after we headed out and we rode through some amazing country with great views around every corner.  The plan was to ride up to Watson Lake, have a quick lunch at the Sign Post Forest, then head to Liard Hotsprings for a dip in the pools before heading to the Northern Rockies Lodge at Muncho Lake. 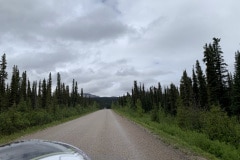 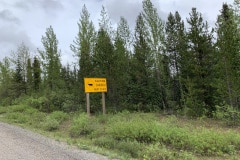 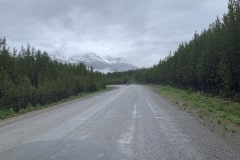 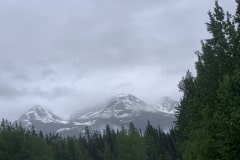 Somewhere after we passed through Good Hope Lake, my CB radio started making noise and I couldn’t squelch it out.  I changed channels and found the same problem on all the other channels.  I just thought it was some sort of atmospheric interference.  I turned the CB off to eliminate the noise in our headsets.  After a few more miles my cruise control stopped working. We were in the middle of nowhere in a very large burned out area along the Dease River. I had no idea what was going on with the bike, but it was still running smoothly so we pressed on.

About 3 kilometers from the Alaska Highway junction, the bike sputtered and stalled while going down a small hill.  It started up on its own again and we managed to limp into the gas station at the intersection.  I figured I had just run out of gas as it was a longer distance than we had ever done without refueling.  I fueled up and the bike fired right up again.  We rode another 15 kms before it died again just shy of the Watson Lake city limits.  By now I knew that more was wrong than just bad gas or faulty fuel pump.  It was the alternator.

Doug and I left the ladies with the bike and we headed into Watson Lake.  I got cell service and called GWRRA roadside assistance.  At the same time we headed to the nearest auto parts store to see if maybe they had an alternator – no luck there.  The Rescue Plus program with the GWRRA was able to send a tow truck out to the site.  It arrived at the same time as we did.  By this time, the bike had sat long enough for the battery to recover and started up.  I rode it into town before it stalled again.  The tow operator (BJ’s Towing) hooked up to the battery with jumper cables and charged the battery for a bit until the bike started again and I followed him to his shop. 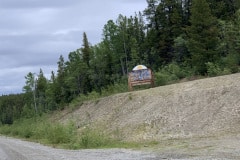 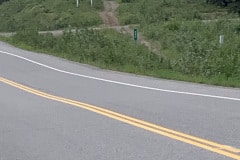 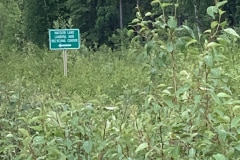 We convinced Doug and Cathy to keep going as their reservations at Muncho Lake were non refundable.  Giselle and I stayed at the shop while I hooked up a trickle charger to the battery and proceeded to remove the alternator and check to see if the brushes were just stuck.  I cleaned it all out and bolted it back in and fired up the bike.  Still no charge.  Meanwhile, Giselle had found a motel in town that had a room available for the night.  I called around to friends and our Honda dealer in Burnaby looking for an alternator.  No luck.  Then I remembered the Chapter Director in Whitehorse, Lee Stevens.  He had a GL500 and as it turned out, a 1500 Valkyrie in his yard.  He offered to pull the alternator out of the Valkyrie and ship it down to me.  As it turns out, the local transport company (Manitoulin Transport) had a truck leaving soon from Whitehorse headed our way.  It all came together and the part was shipped.

We rode the bike into town (the battery had a good charge) and checked into our motel for the night.  The tow operator loaned me his battery charger and we plugged the unit in and left it connected to the battery for the night.