Day one of our trip consisted of our friend and great driver, Guillermo Buitron, picking us up at the Hotel Alpachaca.  He arrived precisely at 10:00, as arranged.  Guillermo comes with very high recommendations from the locals in Cotacachi.  He speaks English and is a very safe driver.  Today was no exception.

We departed from the hotel in Tababela and headed towards Cotacachi on what is normally a two hour drive.  Did we mention this was a holiday weekend in Ecuador?  Holy crap, was the traffic bad!  Not as bad as HWY 1 in the Lower Mainland in BC at the end of a holiday weekend, but comparable.

We left the airport at Tababela and headed north towards HWY 28B which would take us through some absolutely awesome twisty, mountainous terrain (if you were on a motorcycle) to Tabacundo.  About 20 minutes into the trip, we encountered stop and go traffic as far as the eye could see.  Guillermo decided to take an alternate route through Cayambe.  The road twists and turns on the other side of the valley, and eventually ends up at the same spot at the top of a mountain pass where the two roads reconnect, just out of Otavalo.  Here is a map of the area, just to give you an idea of the terrain….mostly around 8,000ft elevation or higher….

The going was great for about 10-15 km when all of a sudden we were parked in traffic again.  After about a half hour of this, we passed by an accident scene.  Two motorcycles (what was left of them) obviously had a head on collision with an SUV.  Debris and motorcycle parts were spread across the highway.  Traffic was reduced to single lane alternating.  I didn’t bother to take any pictures.  It looked pretty gruesome and I do not think the bikers would have survived the crash.  I was pretty quiet the rest of the trip.

We arrived in Cotacachi three hours after leaving our hotel, an hour longer than usual and were dropped off directly in front of our apartment.  We were met by Matilde, our Airbnb host and checked in to our nice apartment. 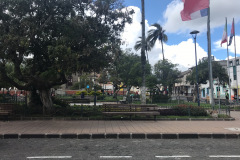 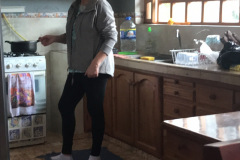 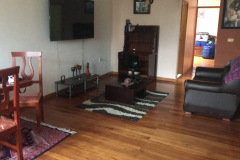 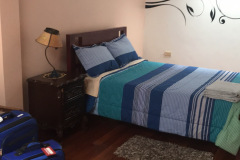 We have a rooftop patio as well with wonderful views of the two inactive volcanoes that shroud this beautiful valley – Imbabura and Cotacachi. 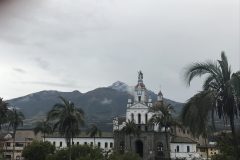 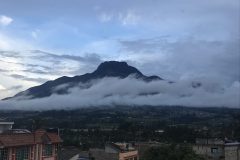