We absolutely fell in love with this country on our first trip.  I blame it all on Wilson, our faithful tour guide. He did such a wonderful job the first time around, we hired him to be our personal guide for the second trip.

Wilson was not available to us on the day we arrived, so we thought.  He told us he had made arrangements for a friend to pick us up at the airport and take us to our hotel.  We booked our own flights this time.  Amazingly enough, Air Canada (through United) flies into Quito with a short layover in Houston.  We landed in Quito just before midnight, after taking off from Vancouver early in the morning.  We fully expected to see a stranger standing in the arrival area waiting for us with our name on a sign.  Nothing of the sort……..Wilson stepped out of nowhere with the biggest smile ever!

We packed our bags into the back of his brand new 4X4 – a Toyota Fortuner – same as a 4Runner in North America.  Very luxurious!  We booked our own hotel before flying down – the Hotel Miguel Angel in Quito – as it came with good reviews.  It was located some 20 miles from the airport in the extreme south end of Quito.  I think the management submitted their own reviews!  It was not what we expected.  Even Wilson was a bit dismayed by the location – not the best part of town, to be sure.

We got checked in with the help of Wilson – nobody spoke any English there. Our room was on the top floor – no elevator.  We hiked up 5 flights of stairs and were shown to our room.  We crashed into bed and slept for a few hours, awakened by the noisy traffic on the street below.  Our room was basic with free wifi, TV, and a small stand with snacks that had to be purchased.  It was clean as was the small bathroom.  The shower took ages to get hot.

We were treated to a beautiful breakfast downstairs.  I think the lady that served it went to the market we found later and bought fresh fruits just for us.  It was delicious.  The table was set nicely, with white throws over the chairs, a colourful tablecloth and pretty dishes.  The owner/manager showed up and they wanted to take pictures of us eating breakfast – maybe to enhance their website????

After breakfast we ventured out onto the street.  Directly across was a small market.  It was loaded with fresh fruits and vegetables nicely set on display. 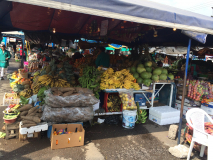 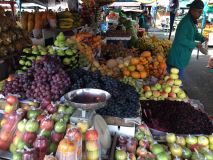 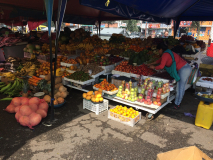 A bit further down we found a sort of small shopping centre.  We ventured inside, but a lot of the shops were not yet open.  It was mostly filled with stores selling jeans and other clothing.  We came out onto another street and wandered down for a kilometer or so until we found a huge modern shopping mall. We wandered around the mall, specifically looking for an outlet that could sell us a SIM card for our cell phone. This mall was huge, with hundreds of shops on two levels.  It even had a skating rink! 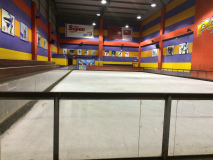 After a nice lunch with our favourite beer at a small restaurant in the mall, we found a cellular store with a salesman that spoke English.  He advised us that we could purchase a SIM card from a machine in the store – it looked just like an ATM machine except it spit out SIM cards. We had to get in line to use it and unfortunately it broke down when it became our turn. So much for that.

We left the mall and headed back towards our hotel.  We took a detour along some side streets to checkout some of the many local shops and restaurants.  it was getting close to dinner time and we were hungry.  We settled on a brightly lit restaurant just down the street from our hotel.  The interior décor was a bit wild – but the food smelled delicious and it was quite busy.  We each ordered a plate of BBQ pork.  It came with chicken soup and some veggies.  The soup was very good, but I was surprised to see something a bit disturbing in the bottom of my bowl………. 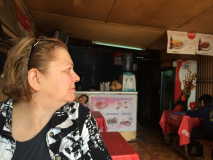 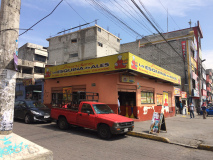 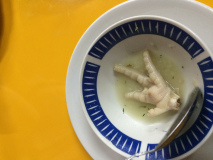